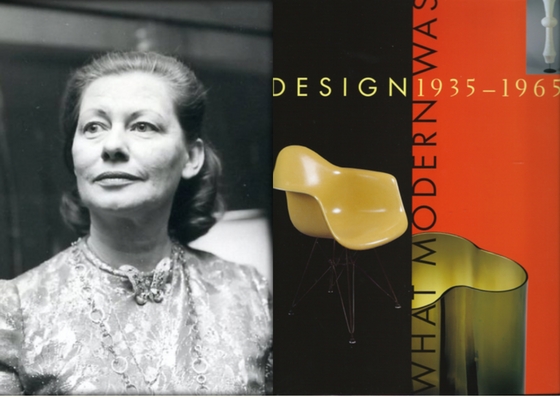 From 1979 until her death in 2014, Liliane Stewart worked to create an important international design collection, and continued the charitable activities of the Macdonald Stewart Foundation, which was founded by her husband David M. Stewart in 1975. Her interests were broad—including subjects ranging from Canadian military history to contemporary jewelry—and her devotion to good causes made her a well-known and beloved figure in Montreal, known as the “best friend of Montreal museums.”

This 2012 documentary film, The Art of Giving/L’art de donner, directed by Philippe Baylaucq and produced by InformAction Inc., uses interviews and historic photos from the Macdonald Stewart Foundation to summarize her lifetime of helping others. An excerpt from the film is presented here.

Video starts with background music with Liliane Stewart written in white lettering, underneath: A Modernist Legacy, in caps, where you see Mrs. Stewart’s image dressed in blue through the lettering.

Mr. and Mrs. Stewart appearing 3 times in the foreground

You can have culture without fortune, and vice-versa.

But when both are combined with a generous heart, with a desire to do something for others, to improve society, well, you get the perfect trifecta of philanthropy.»

Guylaine Simard speaks to the camera

« They created a masterpiece together. After her husband passed away, I get the impression she decided to carry on the work alone as a way to immortalize their beautiful love story,  as a way to pay homage, through the objects she chose, to the man she loved. »

Stewart Program storage shelving opening on decorative objects. The objects that we see are mainly made of wood.

Video showing kitchen exhibition, entitled Craving for Design, organized by the Stewart Program at the Stewart museum, in 2012-13. The kitchen items that we see are very colorful or metallic.

that resonate with meaning for the greatest number. »

David A. Hanks speaks to the camera

« And he saw the modern design as,

Fulvo Bianconi vase & footed glasses by Gunnar Cyrén. The first vase is very large, made of glass and is red, blue and purple. The second vases look like wine glasses and the feet of the glasses are lined and colored with blue, orange, yellow and green.

eventually, this also is history. Right now we’re in the 21st century

Michael Graves, Tea Service. It is a beautiful white and red tea service.

we’re looking back at the 20th century is getting further and further away. But it was really her project.

Photo of Mr. and Mrs. Stewart, dressed formally, posing in the Chateau Dufresne.

And I think he looked at it and supported it and was enthusiastic because of her interest. And I think she really enjoyed having, in a sense, her own museum, in a way, which was a wonderful project. »

Photo of Henning Koppel necklace in the right corner of the image. It is a very beautiful silver necklace with an original shape. The image changes and gives way to two beautiful silver brooches that also have an unusual shape.

then extended to household objects and later moved on to include furniture.»

David Hanks speaks to the camera

Cover of the catalog What Modern Was. It’s a red and black cover, with a yellow chair picture.

Cover of the catalogue: Le Plaisir de L’Objet. It is a very colorful cover with four objects arranged in the four corners of the book.

is sort of a vehicle for understanding the culture, whether it’s earlier periods, or whether it’s of the modern period.

Cover of American Streamline Design. There is a big picture of a white and gray fan on the cover.

So she is very much an object person. She loves decorative arts. »

« This ability to find interesting objects that are unique, whether they be incredible handcrafted masterpieces or mass-produced pieces, shows a certain open-mindedness and vision.»

Cover of Design 1950 2000. It is a red and pink cover, on which there are images of different design objects.

A video shows the Liliane Stewart Collection. We see many design chairs and design objects on tablets.

« Her love for contemporary design was something very whimsical and very daring.It’s something she developed over the years.

A photo of a blue and white vase. The photo then changes to a photo of a very stylish yellow chair.

A video shows the Liliane Stewart Collection. We can see many design objects.

It may not have been a natural talent, but she cultivated it and she was well surrounded.»

« Mrs. Stewart was a visionary. She saw far ahead, thought big, and nothing could stop her. »

Photo of Mrs. Stewart and …

« The expression “Let’s do it right” says it all. It’s thinking things through, focusing on these two goals: excellence and accessibility.»

Phyllis Lambert speaks to the camera

«I mean the proof of the pudding is in the eating. And you see what she has collected, you see the care she’s gone through, you seethe professionalism

A photo of the entrance to Pavillon Liliane & David M. Stewart.

Photo of the Mrs. Stewart collection.

Photos of many design chairs. All the chairs that we can see are very different and have particular shapes.

that she demanded, you see also how it had moved, it just moved alone, silently. I think that’s doing it right, I think that’s just doing it right. Taking what you can do at the moment you can do it and establishing it in the best way you can do it. And then as you learn from that, to again be able to move on. That’s the trick, that’s the wonderful thing, because so many people just set something up and then it stays, but Liliane moved. »

Video of the Mrs. Stewart collection. We can see several objects hanging on the wall, such as chairs, lamps and dressers.

«We often talk about the financial value of a collection, but it’s more than that. Because building a collection is absolutely priceless.  Time cannot be bought. The time it took to gather 6,000 objects, as is the case for Liliane Stewart’s collection, is time we don’t have anymore. It’s opportunities that are lost. »

To Mrs. Bondille’s right, we can see a vase, a lamp, two sofas, a chair and a hook that come from Mrs. Stewart’s collection.

Martin Eidelberg speaks to the camera

We can see an image of the exterior of the Museum of Decorative Arts of Montreal. There are many flowers in front of the museum.

«What she’s done is she’s taken Montréal and given it a very lively institution, through objects, through wings in the museum, through her activity, which is an ongoing thing.»

«If today Montreal is known as a city of design, it’s most likely thanks to Mrs. Stewart, who, 30 years ago, organised daring and interesting exhibitions, which instilled a love and fascination for great contemporary design in Montrealers.»

«She always sought to link the local to the global. I believe that’s the strength of their philanthropic approach.

Photo of Mrs. Stewart smiling and wearing a white shirt and a red handbag.

Photo of Mrs. Stewart dressed very chic and she has a glass of wine in her hand.

Photo of Mrs. Stewart wearing a long grey skirt and a white jacket. There’s four men wearing suits behind her and next to her.

They always strove to achieve excellence at the highest levels, and their efforts were recognized all over the world.»

«And by sending these shows that we’ve created out throughout the United States, and Europe, and through Canada, it’s made Montréal into a design-proud city.

Video showing a big part of Mrs. Stewart’s collection.  We can see many objects, such as chairs, tables, lamps, decorative elements and lamps.

So that’s an incredible gift to the city. And the objects stay. And, you know, 40, 50, 60, a 150 years from now there still will be not merely her name attached to the objects, but there’s going to be the objects themselves.»

Video ends with background music with Liliane Stewart written in white lettering, underneath: A Modernist Legacy, in caps, where you see Mrs. Stewart’s image dressed in blue through the lettering.